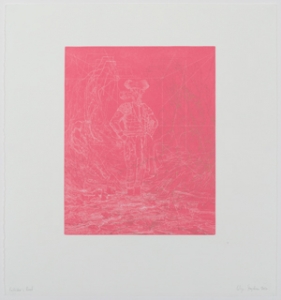 The ‘Edition S’ 2010 artist was Colijn Strydom, who collaborated with master printmaker Zhané Warren, assisted by Sara-Aimee Verity to make a two-plate colour etching. The print was crafted in the hard ground technique printed in an edition of 45 on Zerkall Intaglio 250gsm paper.

Colijn Strydom explains the following of his etching: “The etching focuses on the use of line, and the subject matter is meant to be evocative, and hint at spaces/movements that are not visible. The colour, magenta, aims to complement the line and both, the line and colour, refer to mechanized processes within a quasi-poetic framework. I have made the subject matter both grand and pathetic, with a suggestion of a tongue-in-cheek apocalyptic vision – to be both flippant and serious in a work that alludes to disaster. I have used line in order to suggest at ways of looking that range from the scientific to the psychedelic.”

About the Artist
Colijn Strydom grew up and studied in Pretoria, before moving in 2004 to Stellenbosch to do a postgraduate degree in Fine Art. His first solo show, Tell your daddy I say hello, was held at the AVA in 2008. The exhibition drew on the folk tales/legends of The Flying Dutchman, Racheltjie de Beer and Wolraad Woltemade so as to create a subversive, idiosyncratic world. The works were all large format charcoal drawings on paper. Since then he has exhibited his drawings and paintings mainly in Johannesburg and Cape Town. Recently he also became involved in theater projects, making projections for “Die Kortstondige Raklewe van Anastasia W” (dir. Marthinus Basson, text Marlene van Niekerk). His recent one-man show was held at the iArt Project Space in Wembley Square. The exhibition took inspiration from a Sylvia Plath poem Poppies in October, after which the exhibition was also named.

Colijn Strydom’s work operates in a magic realist space, which is underpinned by irony and self-consciousness. His subject matter is diverse and ranges from Wolraad Woltemade to swimwear models and unicorns. The underlying consistencies are an interest in the body and incomplete narratives. He works predominantly in the drawing medium; the execution ranges from ink to charcoal to Rotring pens. The Rotring pen drawings have an obsessive-compulsive feeling about them, partly due to the many thin wire-like lines that fill the entire surface of the paper. He is also very proficient in the painting medium.