Mia Chaplin: The Making of a Sharp Blade

Posted by WarrenEditions on Feb 6, 2017 in Exhibitions, New Release | No Comments 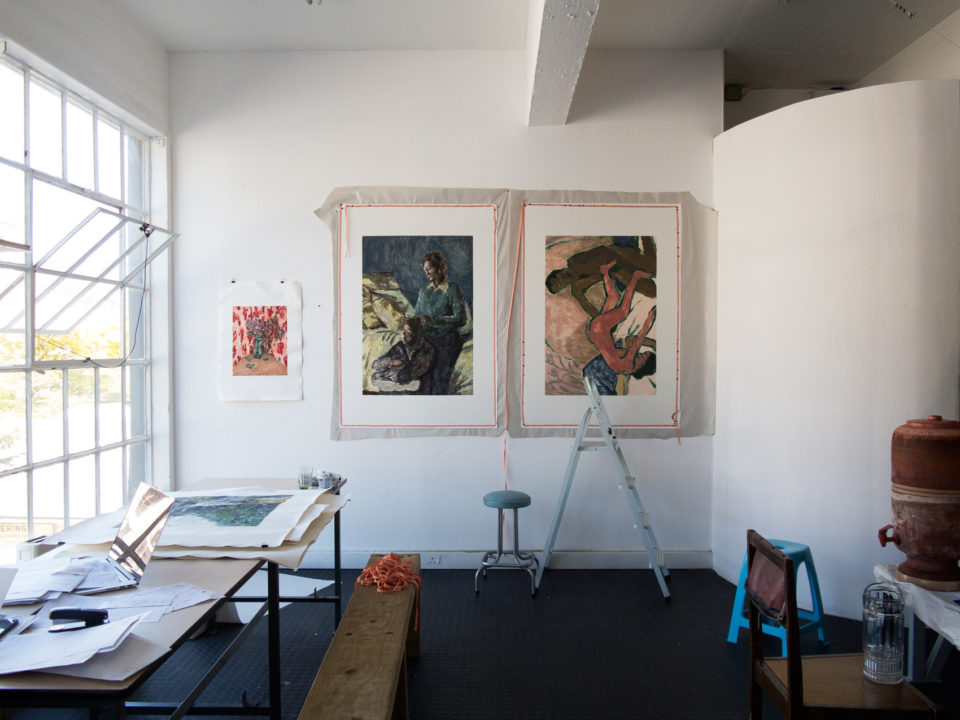 Mia Chaplin’s new series of monotypes, The Making of a Sharp Blade, is Chaplin’s first journey into printmaking, which represents a formal extension to her painting practice. The project has yielded a successful body of work that examines the politics of intimacy in the relationships we have with ourselves and with others.

Chaplin’s most recent exhibition of paintings, Binding Forms[1], has a colour palette ‘evocative of flesh and femininity and a feeling of warmth and safety. But there are also warnings of danger, betrayal and a need for protection.’[2] Chaplin has maintained this approach in her monotypes.  She has adopted a European pictorial tradition, reminiscent of the French Post-Impressionists of the early 19th century (Édouard Vuillard, for instance) and those influenced by the Symbolist movement (most notably Edvard Munch). Emulating these historical painters, she frequently flouts perspective as a formal consideration, using the details of interior scenes as an opportunity to investigate elements of a composition. Chaplin’s subject matter is also reminiscent of that period – still life, nudes, interior scenes and landscapes.

However, Chaplin’s work does not settle comfortably in this historical context. In this series of monotypes, those depicting figures emphasise the body’s awkwardness, inhabiting a space somewhere between the luscious grotesque of Lucian Freud and Frank Auerbach’s belligerent impasto. In the work Barbie Castle, for instance, a female figure lies in a darkened room. Her body is uncomfortably foreshortened, and the angle of her legs in relation to her torso is strained. The treatment of the bed linen and the shadowy room behind her is soft and still, which is at odds with the black outlines and choppier marks used in the rendition of her flesh.

Chaplin has also mined both popular culture and high-brow literature indiscriminately for titles – song lyrics, references to internet memes, lines from poetry. Le dormeur du val, for example, is the title of one of the landscapes in this series – which for Chaplin represent safety and serenity, a kind of Nirvana attainable when one ‘lives outside of fear and outside of pretense.’[3] The work depicts a deep valley, topped by rocky mountains, and through which a river flows. Le Dormeur du Val is also the title of a poem written by Arthur Rimbaud in 1870, in which a ‘young soldier, open-mouthed, bare-headed/With the nape of his neck bathed in cool blue cresses,/Sleeps’. The poem, like the work, promises tranquility, but with an underbelly of darkness – the soldier is dead, of course, and there is no knowing what perils lie on the route to the valley.  In another work, in which two nude figures share – a morsel? …a conversation? …post-coital bliss? – on a pistachio green background behind an ornate and warm-hued floral arrangement. The Garden of Eden mood of the work is undercut by the title, Could be us but you playing, which refers to #ThisCouldBeUsButYouPlayin, a hashtag ‘used ironically to highlight unglamorous or awkward photographs of couples.’[4] Chaplin’s titles jolt the viewer from nostalgia, undermining historical references, signposting the range of her contemporary source material and her acknowledgment of the impact that media has on how we see – ourselves and others.

In her painting practice, Chaplin uses impasto as ‘a way to be looser and yet still descriptive’[5]. In the monotype medium, the impasto technique is impossible because of the flattening action of the press, and so Chaplin needed to find other ways ‘to use [her] heart and not [her] brain to describe a subject.’[6] This project marks Chaplin’s first intensive engagement with monotype and, therefore, she took some time get into her stride. As a result, decisions were made on a more unconscious level, which Chaplin has spoken of as preferential to work that is ‘self-conscious and overly aware.’[7] Working first on a small scale, Chaplin began creating works in one sitting on a single PVC plate. As she became more comfortable, she started to break up her compositions, beginning with flat colours that were then overlain with figurative elements. In some cases, the works are veritable palimpsests containing multiple layers added in order to pull elements of the composition forward or force them to recede – such as in Burn the Wasp, in which final swathes of madder lake pigment pushed the composition to new depths.

Robust tropes have emerged within the work, and the artist’s voice is the clearest in describing their significance:

‘I have used the bedroom to indicate that this is an inward, non-public space that you are entering. The women in my work are grappling with some kind of internal struggle between feeling weak and powerless and wanting to enter into a sexually assertive space in which they have authority over their bodies and their lives. There is an element of performance, of putting on an outer appearance that upon closer inspection turns to stone.’

Chaplin has used the motif of curtains throughout the series, and for her ‘the closed curtain conceals the subject and denies the viewer a direct gaze. The curtain, entrancing and decorative, thus becomes a protective barrier much like the skin or a cloak.’

Chaplin’s process of grappling with the monotype medium mirrors the internal struggle that her characters face in a laudable example of making as therapy. From a practical perspective, the painter who is used to being insulated in the cloistered space of her studio, suddenly finds herself revealed in the collaborative workshop environment. Although the print studio is a supportive setting, the exposure can nonetheless be daunting. Furthermore, because of the need to work in reverse, as well as the transformative nature of the press, when a print gets pulled off the press bed, the artist is seeing it for the first time, along with everyone else. There is no private space in which to consider the work before it is revealed – nowhere to hide, so to speak. Additionally, in the case of monotype (being a unique print) there is only one shot at each image, and so there is little opportunity to revise, other than by layering. This can be unnerving, especially for an artist working in a semi-autobiographical mode, as Chaplin does. The challenge can also be incredibly generative.

Chaplin talks of her characters ‘overcoming fears of intimacy’ in order to ‘reach a state of self-acceptance and being able to share more openly with others.’ The blade referred to in the title of the project, which is the power these female characters gain in overcoming their fears, has been sharpened in this case on the whetstone of printmaking.