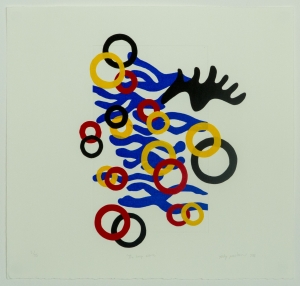 Warren Editions is very proud to announce the Edition ‘S’ 2014 artist – Jody Paulsen. He is the sixth artist of the Edition ‘S’ project, launched by Warren Editions in September 2009. The print produced with WE is executed in hard ground etching, aquatint and in-house printed cotton hand-cut and hand collaged on Zerkall Intaglio 250gsm paper, in an edition of 55. Accompanying the edition are 5 Artist’s Proofs, 7 Printer’s Proofs, a Publisher’s Proof, Hors Commerse and Bon á Tirer.

Jody Paulsen graduated from the Michaelis School of Fine Art in 2009. He obtained a Masters degree from the same institution in 2013. Paulsen was awarded the Katherine Harries Print Cabinet Award in 2009 and the Jules Kramer Departmental Scholarship Award in 2012. He has shown in numerous group exhibitions across the country, including The Night Show at the Goodman Gallery Cape Town in 2011, and the prestigious Sasol New Signatures Award at the Pretoria Art Museum in 2010. Pursuing his interest in fashion, Paulsen collaborated with Adriaan Kuiters for the Spring/Summer 2014 collection as part of the Mercedes-Benz Cape Town Fashion Week.